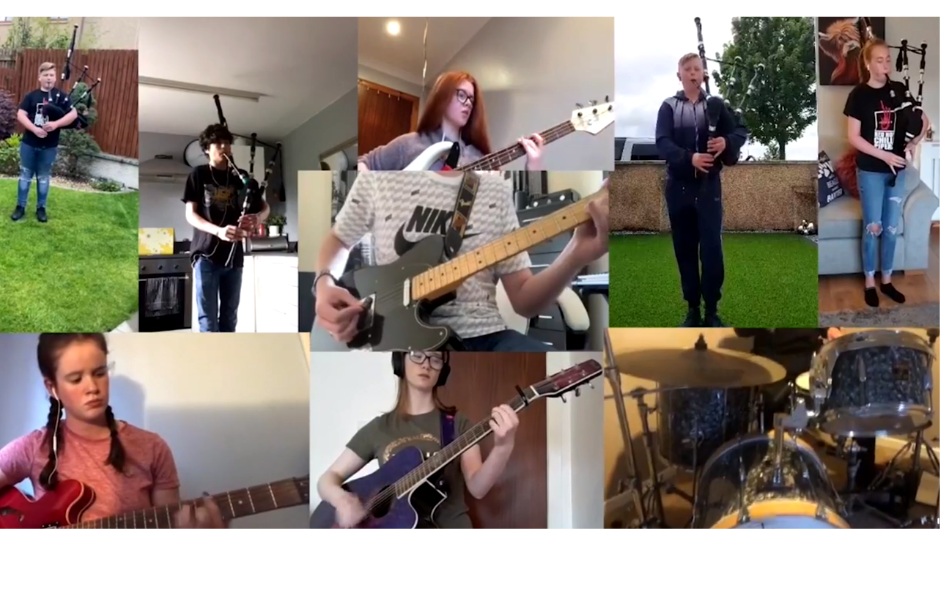 We are delighted to be running the Scottish Schools online Freestyle Championships 2021  – a showcase and celebration of Scotland’s talented young musicians.

As you may know, the Freestyle competition is normally a highlight of the Scottish Schools Pipe Band Championships – due to take place next in March 2022.

As usual, the choice of music is entirely up to the band or group – it can be contemporary, cover songs, traditional, a medley or a single melody – whatever inspires you.

There are some changes to the normal format:

If you have registered to take part, you will need to enter below AND send in your finished film by the deadline of midday on Sunday 14 March.

As pupils can’t play together in person for the foreseeable future, you will want to use an App like Acapella to compile separate recordings and films of individual players into one film. Please film in HD 1920 x 1080 pixels and not 4k 3840 x 2160 pixels.  This will make your film quick to transfer.  If your film is a large file size, you may find that it takes hours to upload (and the same to download at this end!) with possible issues around uploading it at all.

You must label your film with the title of the band that you have submitted already, or agreed with us, as well as the name of your performance.

If you have any questions about technicalities, please contact us at [email protected] and we’ll try to put you in touch with someone who can guide you.

The Scottish Schools Pipes and Drums Trust might be able to lend your state school a set of B-flat chanters to help harmonise the pipes with other instruments. Please enquire by email to [email protected]

Films will be broadcast over the weekend of 26 -28 March when the judges’ winners will be announced, and there will be an exciting live People’s Choice Vote.  Our online competition Wake Up Scotland attracted 120,000 individual views on voting day last summer, so we expect a big audience this time too!

A prize pool of £2,500 will be shared amongst the winning schools. The breakdown of prizes can be found below:

Keep up to date with competition updates by following our Facebook page Pipe Bands for Schools.

We look forward to enjoying your filmed performance; hope you have a lot of fun preparing for the competition; and wish you the very best of luck.

There is a two-stage process to enter the competition:

a mixed musical ensemble comprising pipers and a range of other instrumentalists.  The ensemble may include one or more vocalists.

Choice of music and film entry

Full terms and conditions of the competition can be found here.

We use cookies to ensure that we give you the best experience on our website. If you continue to use this site we will assume that you are happy with it.Ok